Prayash Gupta (Prayash Gorkha) is an Indian author, columnist, lyricist and singer. He was born and brought up in Pulbazar, Darjeeling. At present, he is working as an Assistant Professor at Sikkim Manipal University. His biographical note has been included in “Asia Pacific Who’s Who (Vol. XV) 2016, “Famous India: Nation Who’s who,” 2016 and “Learned India: Educationalists Who’s Who,” 2017,” “Famous India: Nation Who’s Who,” 2018. He has been awarded “Best Indian Golden Personalities Award” 2017 by Friendship Forum, New Delhi, “Global Teacher Award,” 2018 by AKS Education award, New Delhi. 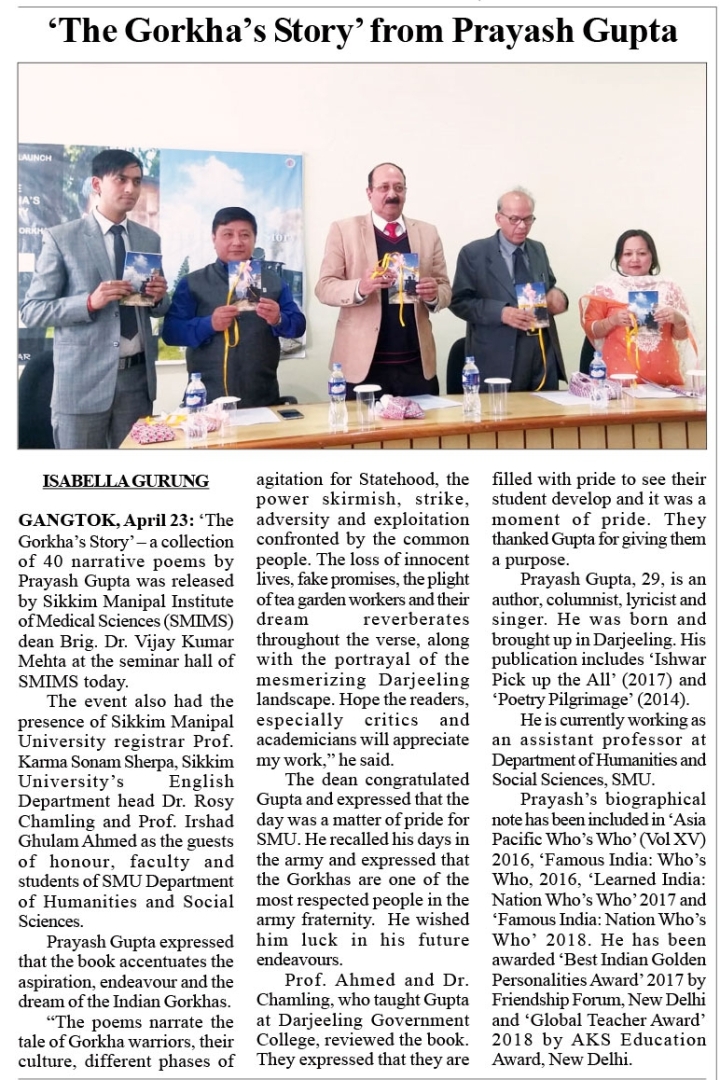 Ishwar Pick UP THE CALL

Ishwar pick up the call is a novella that narrates some life events of college students. The title has a connection with fiction as Anyashna calls Ishwar, her boyfriend to give him good news about his success. It also has to do with people trying to call Ishwar or God, to make close connection with him for peaceful and happy life. The character of the fiction also craves for the same but destiny has its own role to play. Dipak, a lower caste boy loved flirting with girls. His encounter with Sitara, a modest girl, made him more a true lover. He desired to confess his love and lead a happy life with her. Abishkar comes from well-to-do family and is least interested in studies. By any means, he wants to earn more in a short period and desires to lead a happy life with Karuna, a girl who loves her poor mother but is less conscious about her struggle. Anyashna is hardworking and sensitive girl. She also desires happy and settled life with her lover Ishwar, a boy more concerned about his future. The plot of the novella revolves around their aspiration, action, reaction, sensitiveness and the play of destiny in their lives.